That was the big question for me months ago as I registered for Dreamforce, made hotel reservations, and booked my flight. Rumor was that the conference would be constrained to 30,000 attendees, partly because the service industry in San Francisco had not fully recovered from the pandemic. Who would be attending? Would it be admins who have been patiently waiting for years to attend their first Dreamforce conference, or decision makers eager to get back to the annual gathering? All I could do was hope for the best and click “buy.” 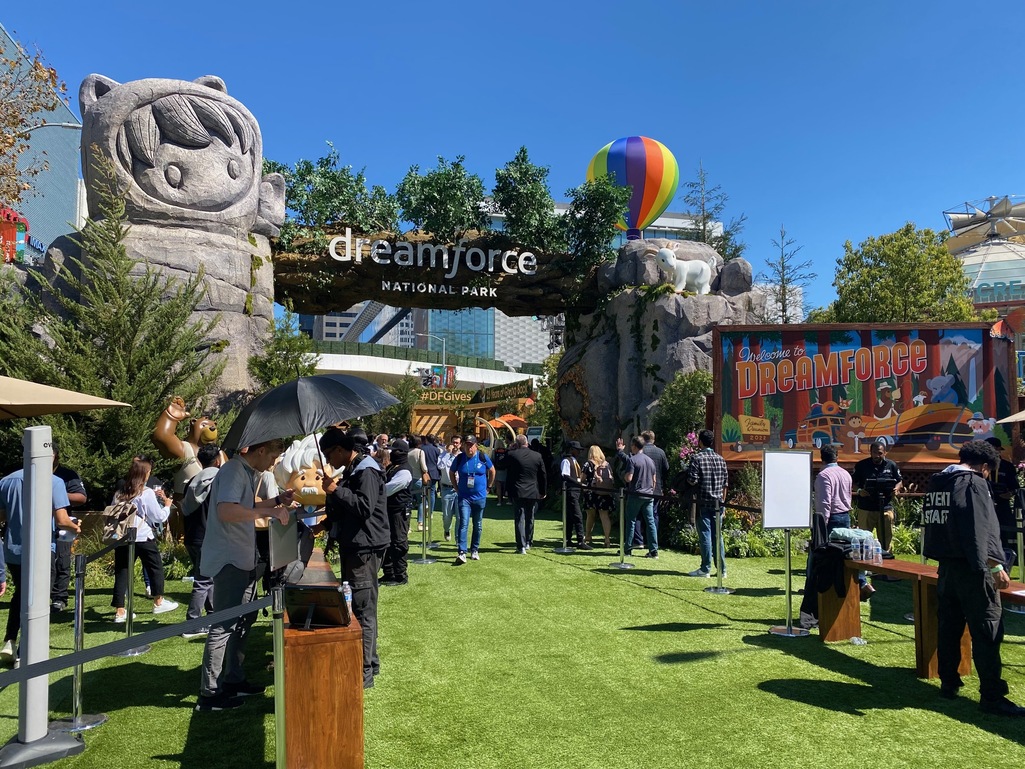 The must-attend session of Dreamforce is always the main keynote. As a Dreamforce veteran, I knew to start queuing up at least 90 minutes early — and not to load up on coffee beforehand! I would be sitting for hours, as the keynote always runs WAY past its allotted time. Thanks to my status as a Salesforce MVP, I was fortunate to be seated up front by the main stage.

This year, Dreamforce Co-CEO Bret Taylor co-hosted the keynote alongside Marc Benioff. Marc is still the ringmaster — displaying endless energy and enthusiasm. He carried the messaging that is close to his heart, namely the local San Francisco community, philanthropy, and the environment. Brett came across as a veteran and was very poised, kicking off the product showcases for other Salesforce executives to present. Notably absent on stage was co-founder Parker Harris. He was there on the front row and was recognized, but he did not lead any of the presentations. We were wowed by plenty of Hollywood-grade videos reinforcing our connections as a family of Trailblazers.

Numerous press releases went live during the keynote, so I won’t attempt to recap those for you here, but they’re worth reviewing to catch up on the latest announcements. 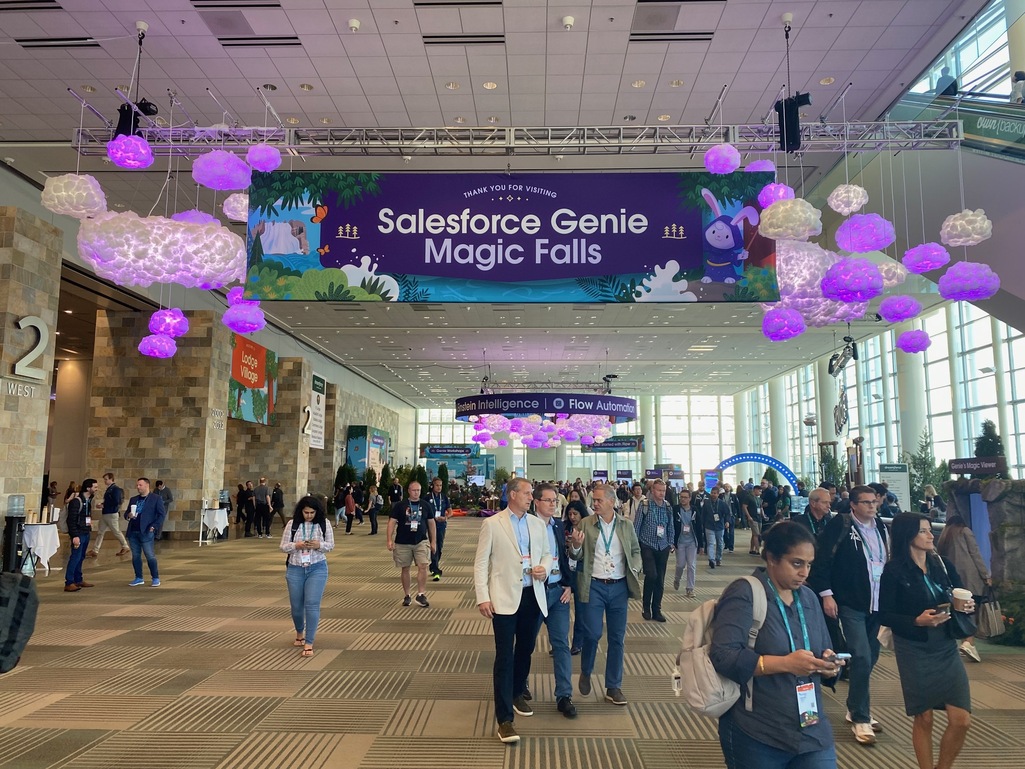 I chose my agenda based on ShellBlack’s focus on the financial services industry, limiting my attendance to the following FINS sessions: Financial Services Keynote, Financial Services Cloud Roadmap, and How to Win With Wealth and Asset Management.

This session was at capacity. Literally hundreds of people who were queued for the event could not get in. Some highlights (or claims) from the keynote: 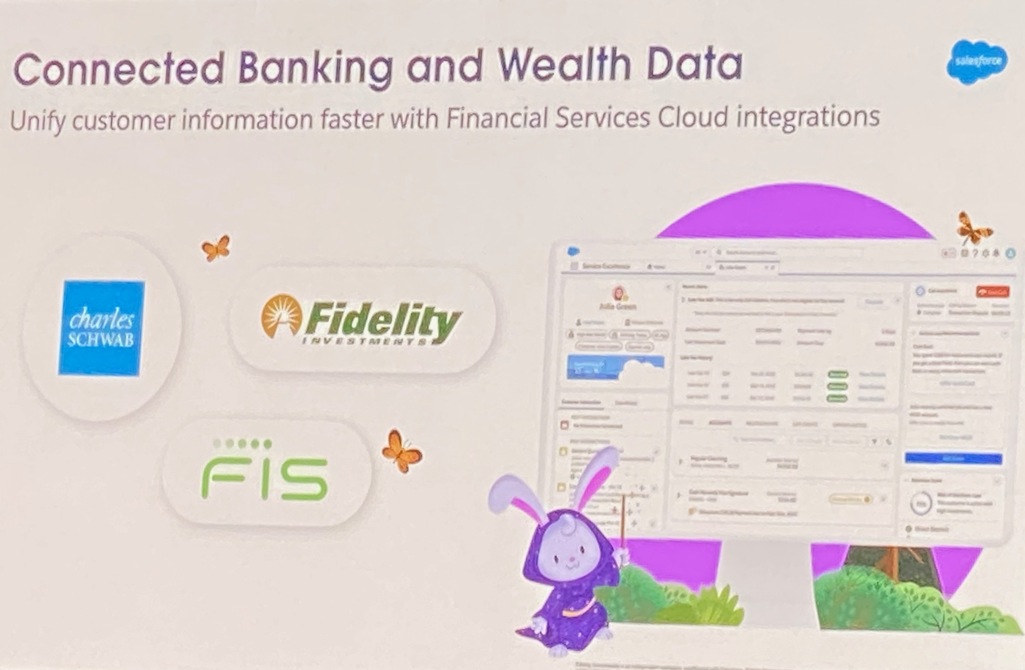 Image was captured during the Dreamforce Financial Services Keynote

In my opinion, there was not much substance to the keynote. The messaging was heavily marketing-driven and was targeted to very large financial services customers (i.e. enterprise and strategic customers).

This was another disappointing session. As we filed out the back door, you could hear multiple attendees murmur, “Where was the roadmap?” I have to agree — I felt like I was the victim of clickbait. Some of the features that became GA (generally available) this summer were highlighted, but everything else discussed was framed as, “This is on our radar” or “We’re working on this,” but no time frames were given. All you could conclude was that topics presented may see the light of day, or not, or Salesforce could change their mind altogether.

This panel session was moderated by Michelle Feinstein, GM/VP Global Wealth & Asset Management for Salesforce. Michelle was also seen carrying the torch for Salesforce at the T3 Conference earlier this year.

Michelle did a great job setting the table for the panelists by summarizing the challenges facing wealth firms today:

Greg was the star of the session. I hope he’s getting free licenses in exchange for all the licenses he sold for Salesforce at Dreamforce this year. Why? RBC Wealth Management is actually spending the millions of dollars each year needed to pull off the vision that Salesforce paints for its customers and prospects. Some nuggets gleaned from Greg’s comments: 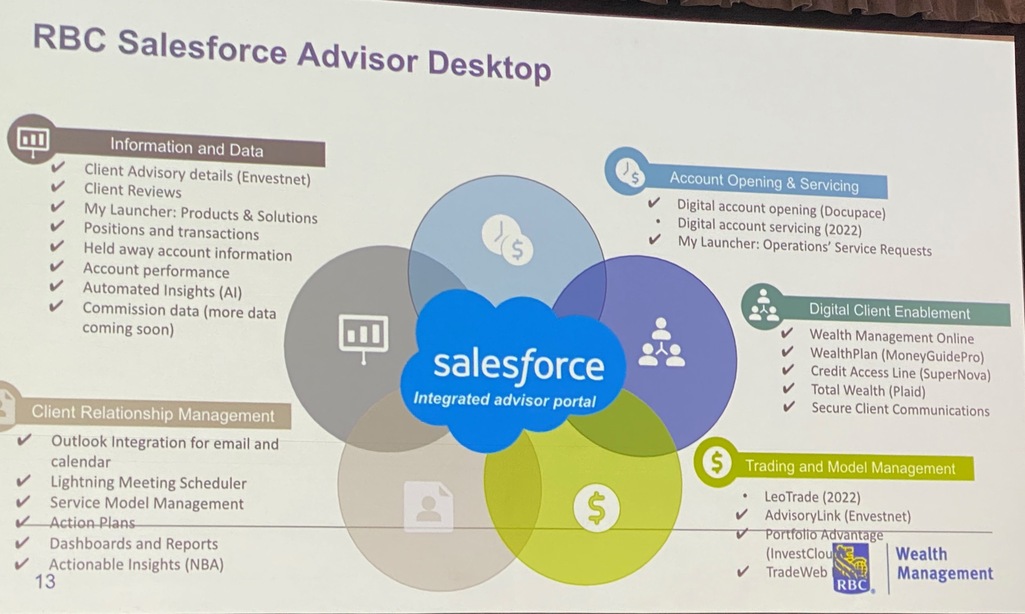 Image was captured during the RBC presentation

Conclusion — Dreamforce Is Back (or at least it felt like it)

This year was the 20th anniversary of Dreamforce. 38,000 attendees is not insignificant, but it pales in comparison to the 150,000 attendees of past events. Salesforce did a great job of creating the appearance of a jam-packed event — mostly by limiting the footprint of the event tightly around Moscone Center rather than spilling over into a “campus” of neighboring hotels as in the past. Salesforce claimed 1,000 sessions, but I would attribute that to a lot of creative liberty (like “fireside chats” and repeating product sessions that went on all day). Additionally, the event was three days this year rather than four, further compressing the event.

Next year, I suspect Dreamforce attendance will be double or triple what we saw this year. Though Dreamforce would be better served by a city like Las Vegas, Ringmaster Marc Benioff will never let it leave San Francisco. 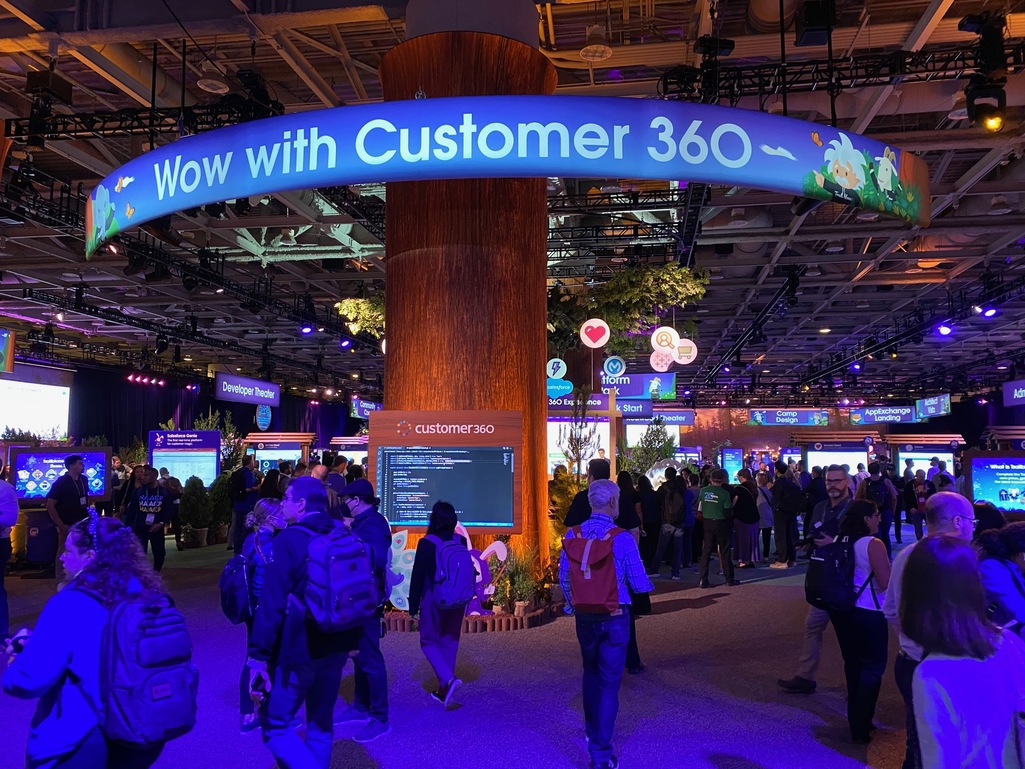